WEEKLY COMMENTARY: When Do We Help Someone In Trouble Who Could Have Prevented Their Problem? 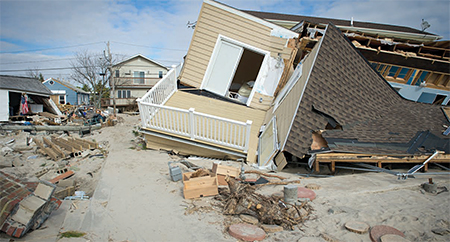 It took a hurricane to really test  what I had learned as a youth – love your neighbors, look out for them, give them as much from your heart as you give to yourself.

We had been warned for several days that Hurricane Sandy was coming.  Radio and TV news advised listeners to get a supply of things like flashlight batteries, and some listeners took it one step further and purchased generators, fully expecting the electric power to be down for days.  Others made plans to leave town and stay with friends or relatives further inland who could be expected to have heat and light.  But, some people never got around to doing any of these things before the storm hit.

Here is my question:  What was MY obligation to those who did not plan ahead so as to take care of themselves during and after the storm?

We had expected the high-speed, gusty winds, which uprooted large trees and broke tree limbs, which in turn came crashing down on power lines.  The next day there were many roads blocked by fallen debris and live wires.  First Responders were called to pump out flooded basements and to take some neighbors with strokes or heart attacks to local hospitals, some of which were operating on back-up electricity generators.

Meanwhile, some Jersey shore residents had refused to evacuate.  They said their house had been in the family for many years, and had survived many past storms, so they would stay there to contain the storm damage as it occurred.  Later, some would regret that decision – should the  First Responders save them, regardless of the danger they had created for the rescuing First Responders?

Up in Morris County, away from the Shore, some people planned for the safety of themselves and their families – only to have a large tree come crashing down unexpectedly through the roof of their house.

And then there were Senior Citizens living alone in retirement, apart from the rest of their family.  The plan of some Seniors was simply to call on their adult children if anything came along beyond their control.  However, the problem was that some of their adult children had forgotten to tank-up their cars, and some of their cars had been damaged by fallen trees.  So, some Seniors then had to depend on neighbors, or just hope for the best!

While some people had never made plans for their own protection, others had pretty good plans which were defeated by the forces of nature.  I wonder if there is any simple answer to how big our helping role should be in these situations?  How much should we share of the time, encouragement and resources, which we might otherwise keep for our own use?  So, when other peoples’ welfare is at stake, do we draw a  line between “deserved” assistance” and “undeserved” assistance?

Is this situation a time for some kind of forgiveness?  After all, it might spare someone needless suffering – it might not be merely a matter of providing extra blankets because their furnace is no longer working.

One of the problems with forgiving someone for their planning failures is the “double standard”.  We saw the dangers coming and purposefully avoided them.  Shouldn’t others pay for the consequences if they were less vigilant, less organized, less focused on out-foxing the hurricane?

Some times I see no simple answer to such questions.  Perhaps the negligence of some person also sealed the fate of his wife and children.  Should all of them pay for the consequences?  We all make mistakes – if I am in the position to help save someone, perhaps I should ask no questions, and just do the necessary to the fullest extent I am able.