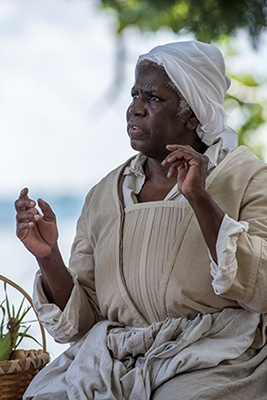 The first enslaved Africans on the English North American mainline arrived in 1619 in Jamestown, Virginia. They were from Angola, and were stolen from a slave ship in the Gulf of Mexico by a group of “privateers,” more commonly known as pirates. Twenty to thirty of these people were bought from those pirates in 1619 in Jamestown in exchange for food. In 1625, one of the women possibly from that group, a woman named Angelo or Angela, was listed in the census of Jamestown, living in the house of a wealthy planter and merchant. When I visited Jamestown in early October, archaeologists excavating the site of that house were excited because they had just weeks before uncovered what they believed was evidence of Angelo living there. It was a shell from Africa, often worn by enslaved Africans of that time period as jewelry.

I am sorry to admit that I had never heard of Angelo until a couple weeks ago, and yet there is no arguing that she is an important figure in the history of this country. It is a shameful part of that history, to be sure, which is maybe why it has been buried for so long. Even today, while there is a statue to John Smith in Jamestown, and for Pocahontas, Angelo has a hole in the ground, but she and the others who arrived here enslaved, beginning 400 years ago, are every bit as important to our national history as the folks who have been given monuments and statues. And I admire those who keep digging to uncover their stories, because their names are known, their lives are cherished by the One who made them, and their stories deserve to be known and cherished by all of us as well.

Read more about the Angela Site .